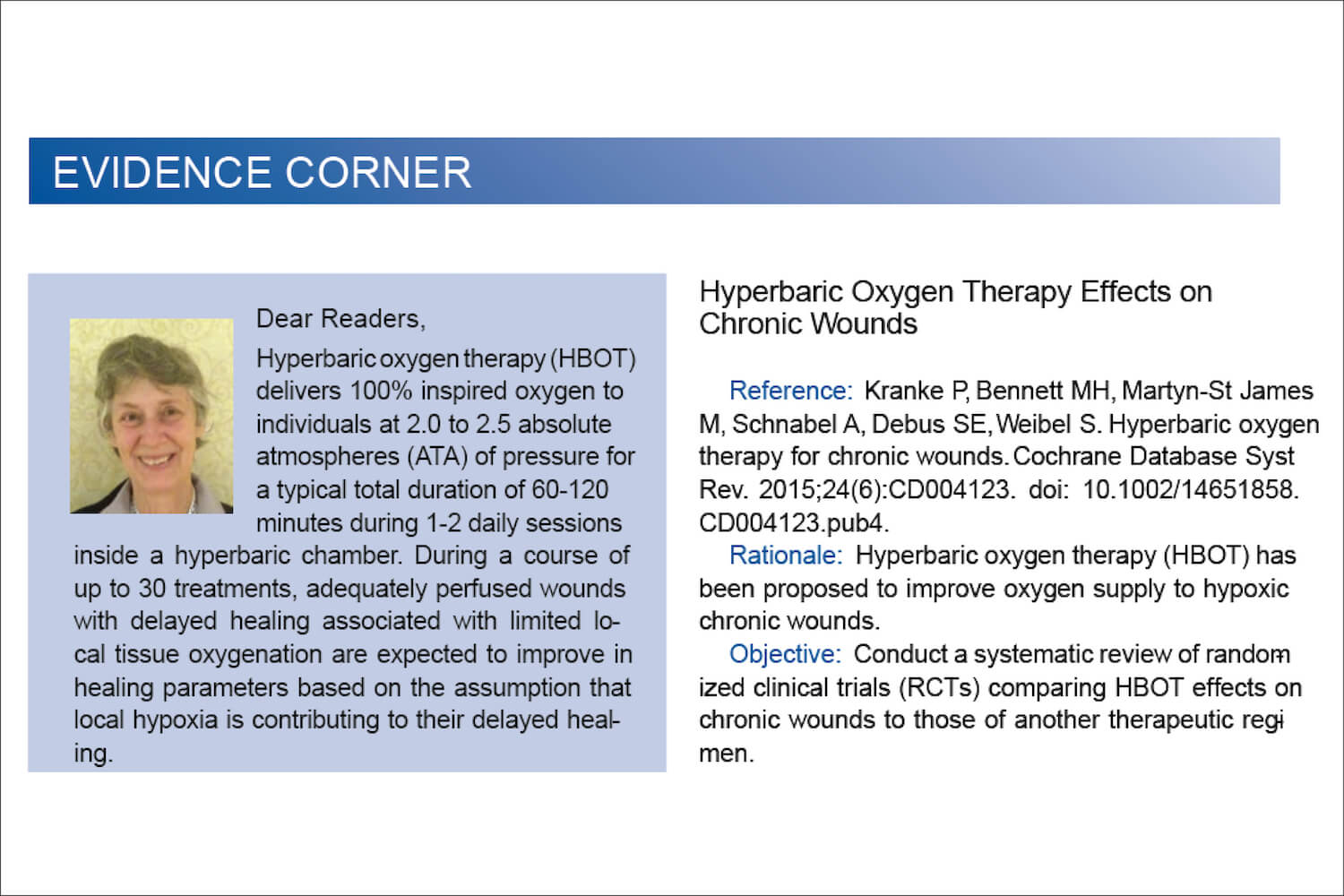 Oxygen is a significant factor in wound healing. In general, living tissue needs oxygen and nutrients to thrive, and with wounds, it is needed to regenerate healthy tissue. A wound is dependent on both the supply of oxygen to the wound tissue, which is determined by the pulmonary gas exchange and the blood haemoglobin level.


HBO or Hyperbaric Oxygen Therapy employed as an adjunctive treatment particularly for wound care involves exposing the body to 100% oxygen at a pressure that is greater than normal. To speed up healing, injuries need an adequate amount of pure “Oxygen”. This effective therapy can be done in several ways. It can be provided in a special type of room called a “Hyperbaric Oxygen Chamber” or monoplace.

Hyperbaric oxygen therapy (HBOT) delivers 100% inspired oxygen to individuals at 2.0 to 2.5 absolute atmospheres (ATA) of pressure for a typical total duration of 60-120 minutes during 1-2 daily sessions inside a hyperbaric chamber.

Laura Bolton conducted a systematic review of randomized clinical trials (RCTs) comparing HBOT effects on chronic wounds to those of another therapeutic regimen.

Cochrane Library, MEDLINE, CINAHL, and EMBASE databases were searched from inception to February 2015 for RCTs comparing effects of HBOT to at least 1 other non-HBOT therapeutic regimen on chronic wound healing.

Five RCTs on 205 participants with a diabetic foot ulcer (DFU) revealed a transient increase (P = 0.01) in the per cent of patients healed during 6 weeks of treatment with standard care plus adjunctive HBOT compared to the same standard of care alone, or with control subjects breathing ambient air at the same absolute atmospheres (ATA) (sham), or compared to a standardized protocol including debridement plus topical antiseptic agents. Some evidence supports significant DFU healing improvement during 6 weeks of HBOT, but this benefit is not evident at later follow up. Hyperbaric oxygen therapy does not appear to significantly improve related minor amputation rates. Further research is needed to explore HBOT effects on other chronic wounds or on major amputations for individuals with a DFU.