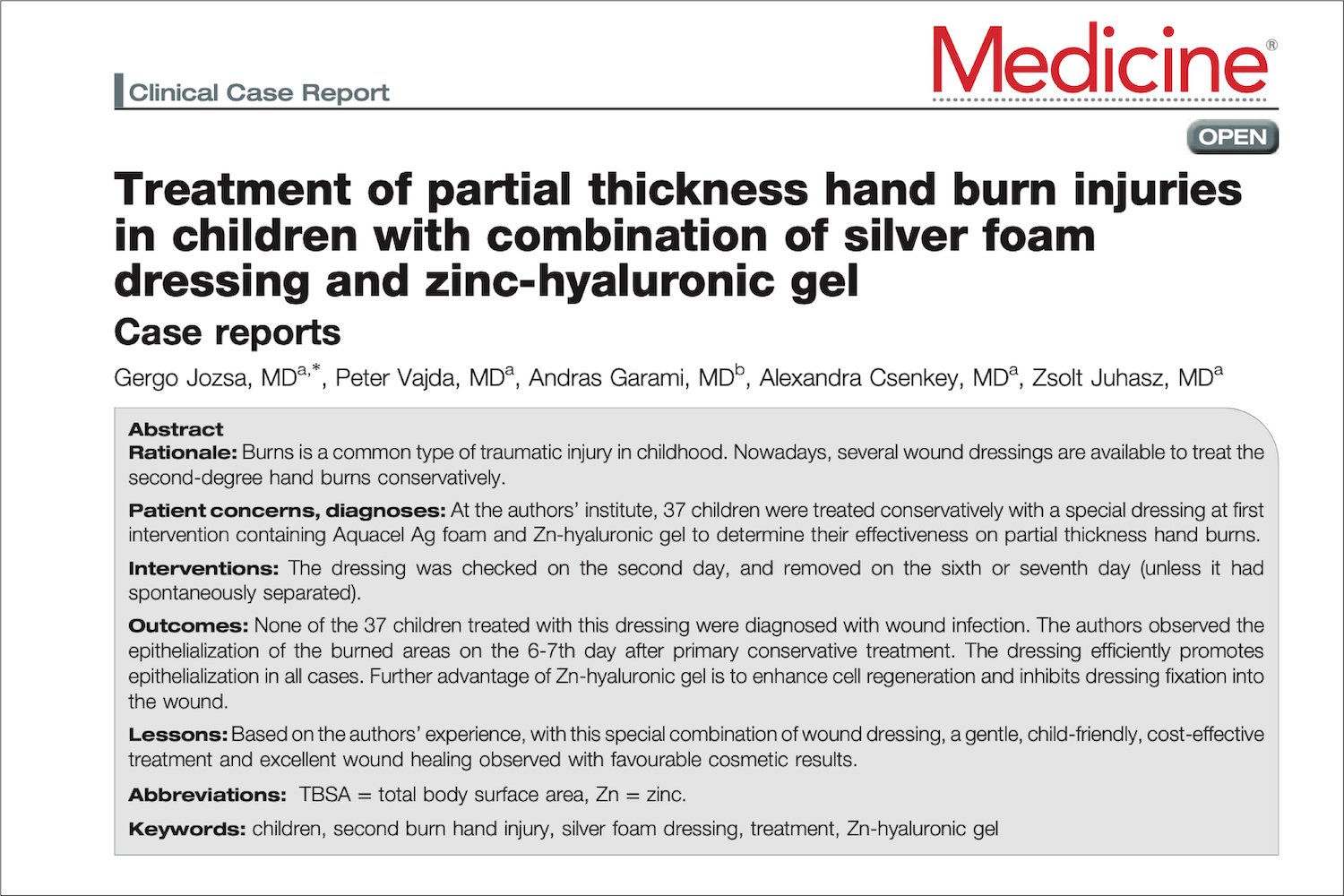 Burn injury in childhood is mainly caused by extreme heat, electricity, chemicals, friction, or radiation. The most frequently affected age group is the one. The most common cause of hand burn injury in children is the scald from hot water. Burns can be classified by the severity of damage to the skin layers (depth of burns) and the affected surface area of the skin.


First-degree burn (redness of the skin, like sunburn) affects only the superficial skin layers and these superficial burns do not need medical care. Partial-thickness lesion or second-degree burn (blisters covering a red base) reaches the deeper skin layers, extending to the whole epidermis and the dermis. Third-degree burn (widespread thickness with a white, leathery appearance) extends to all layers of the skin and occasionally even further. Bones can be involved in fourth-degree burn (carbonization), the affected area is homogeneously black and charred.

The hydrofiber dressing consists of a superficial polyurethane waterproof layer and a multi-layered absorbent surface containing 1.2% ionized silver. The dressing absorbs the wound secretion as the hydrofiber layer transforms into a gel, which facilitates wound-humidification, faster healing, and protects against infections. Zinc-hyaluronic acid, which promotes cell regeneration, therefore, contributes to faster regeneration of the wound.

Gergo Jozsa conducted this study in which 37 children were treated conservatively with a special dressing at first intervention containing Hydrofiber dressing with silver foam and Zn-hyaluronic gel to determine their effectiveness on partial-thickness hand burns. The dressing was checked on the second day and removed on the sixth or seventh day (unless it had spontaneously separated).

None of the 37 children treated with this dressing was diagnosed with wound infection. The authors observed the epithelialization of the burned areas on the 6-7th day after primary conservative treatment. The dressing efficiently promotes epithelialization in all cases. The further advantage of Zn-hyaluronic gel is to enhance cell regeneration and inhibits dressing fixation into the wound.

The limitations of our study are that it was conducted in 1 centre only and involved only 1 method.

Hydrofiber silver foam combined with Zn-hyaluronan gel can be considered an effective, gentle, and child-friendly treatment, which ensures preferential wound healing and subservient cosmetic results. It has to be noted, however, that this dressing should be applied only after an exact assessment of the burn’s depth.

Dressings for the prevention of surgical site infection (Review)