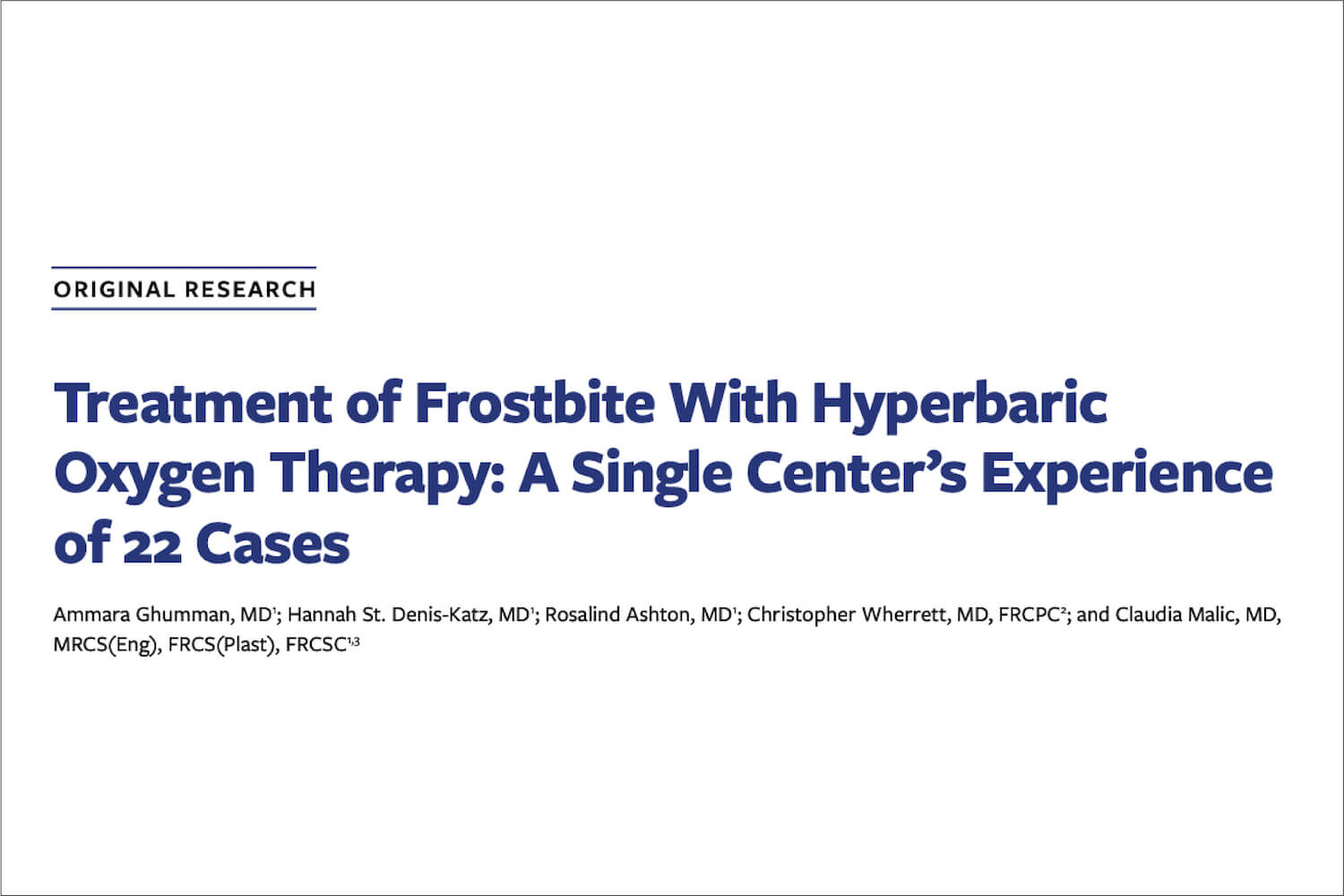 Treatment of Frostbite With Hyperbaric Oxygen Therapy: A Single Center’s Experience of 22 Cases

Hyperbaric oxygen therapy (HBOT) treats patients with 100% oxygen at greater than 1.0 atmosphere (atm). This is the largest series (22 cases) in the literature of patients with frostbite treated with HBOT as an adjunct to wound care.

Frostbite is a localized cold thermal injury from exposure to temperatures low enough to cause ice crystal formation in tissues, resulting in damage to cell membranes and osmotically dehydrated cells. The feet and hands are the most commonly affected areas. Frostbite occurs because of 3 interlinked processes:

Hyperbaric oxygen therapy (HBOT) treats patients with 100% oxygen at greater than 1.0 atmosphere (atm). It can be used to treat selected ischemic problem wounds, wounds caused by radiation, compromised flaps and grafts, and ischemia-reperfusion disorders.  HBOT compensates for some microcirculatory failure and tissue hypoxia by increasing oxygen delivery to ischemic tissues directly via elevated arterial oxygen concentration and indirectly via angiogenesis and resolution of tissue edema.

A retrospective review of medical records of patients admitted with a frostbite injury and treated with HBOT at the authors’ university hospital between January 2000 and March 2015 was performed.

All patients underwent a modified McCauley et al4 protocol with rapid rewarming, tetanus prophylaxis, nonsteroidal anti-inflammatory drugs, pain control with multimodal analgesia, and antiplatelet or anticoagulant treatment. A total of 22 patients were identified from the hyperbaric unit medical records. Of the 22 patients included, 18 were male (81.8%) and 4 were female (18.2%).

Hyperbaric oxygen therapy was administered at a pressure of 2.5 atm absolute (49.5 feet seawater) in 3 cycles of 30 minutes separated by 2 air breaks of 10 minutes.

In the frostbite literature, several studies have examined the utility of HBOT. Hyperbaric oxygen therapy was first reported in frostbite injuries in 1963 by Ledingham.

Although early initiation of HBOT in frostbite injury is advocated, research suggests there are protective effects of HBOT even when initiation is delayed, including antibacterial action and angiogenesis effect.

This is the largest series (22 cases) in the literature of patients with frostbite treated with HBOT as an adjunct to wound care. In half of the cases requiring amputation, there was an observed possible beneficial effect of HBOT, because final amputation level was distal to predicted level from pretreatment bone scans.